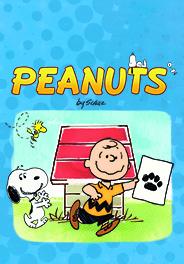 The daily smile!
► Peanuts is the most popular and influential in the history of comic strips
► A readership of 355 million in 75 countries


For more than 60 years, Snoopy, Charlie Brown, Woodstock and the whole Peanuts
gang have delighted millions of readers around the world on a daily basis.
Today, for the very first time, the original comic strips of the amazing Charles M.
Schulz come to life in France. With humor, intelligence, mischievousness,
tenderness and generosity, Peanuts now comes alive every day on our screens!
Credits
PEANUTS®, after the comic strip created by Charles M. Schulz
Adapted for the screen and directed by Alexis Lavillat
Produced and made in France by N O R M AA L animation
Produced by Alexis Lavillat
In partnership with Peanuts Worldwide LLC / Kim Towner.
With the participation of France Télévisions and Télétoon +
Videos