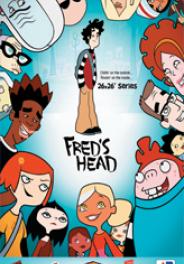 On the stormy and sometimes absurd seas of adolescence, Fred's head navigates against the prevailing winds. He is a buccaneer of political incorrectness. Everyone seeks to force Fred's head - misunderstood in his silent rebellion - to conform. There is nothing less conventional, however, than the strange world in which he lives: an undesirable best friend, a psychotic psychologist and an indifferent ladylove are but three of the eccentric characters who appear in Fred's head.
Credits
Coproducers: Spectra Animation et Galaxy 7
Directors: Sylvain Lavoie, Benoit Godbout
Showrunners: Benoit Godbout, Malorie Nault Cousineau
Videos