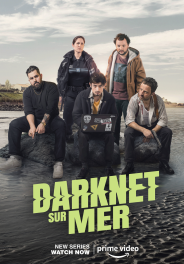 Ponet-sur-Mer is a quiet little fishing port on the island of Oleron where nothing much happens apart from the Oyster Festival. A way too quiet life for Ben and Florian, two young gamers, streamers, and hackers, who share their time between thankless jobs as cleaning agents at the local spa and a much more exciting double life on the web and Darknet. 500km away, in the Parisian suburbs, Alkan, an easygoing, bling-bling Albanian gangster, is ordered by his boss to eliminate a rival clan leader. But the fact is he has been faking it for years and is incapable of killing a single soul. An insurmountable obstacle that makes him the laughingstock of his gang. When his best friend Veran, a real cold-blooded killer, refuses to carry out the mission for him, he secretly calls upon a contract killing service on the Darknet. Little does he knows who’s behind the mysterious Vrasesin website...
Cast
Théo Fernandez , Léon Plazol, Artus, Arié Elmaleh, Vincent Desagnat, Joséphine Drai
Credits
Produced by White Lion Films
Directed by Rémy Four and Julien War
Videos