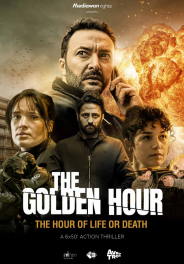 The first hour after a terrorist attack is crucial. The hour when panic and fear, are overwhelming and the danger of a second attack is the greatest. The hour that brings out the best and worst in people. This important hour of life or death forms the base of the new, exciting thriller series The Golden Hour. Mardik, a driven detective of Afghan origin, is distrusted by an AIVD employee after she discovers something about his past. One evening, Mardik receives a disturbing text message revealing that his childhood friend Faysal has come to the Netherlands. When a terrorist attack is carried out the next day, Mardik immediately suspects Faysal and goes to investigate, with drastic consequences...
Cast
Nasrdin Dchar, Ellen Parren, Matteo van der Grijn, Abbas Fasaei
Credits
Produced by: NL Films (Banijay)
Directed by: Bobby Boermans
Broadcaster: AVROTROS
Videos