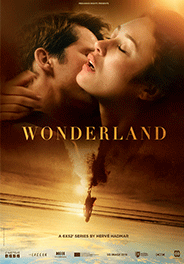 Two people who never should have met, fall in love...


Jeremy, 33, is a lonely Parisian. He’s never felt like he belonged anywhere. One night, he discovers The Wonderland, a club with live music run by a charismatic manager called Tony. Jeremy starts bartending there, where dozens of photos cover the wall, telling the story of the club.
One of them catch Jeremy’s attention: the one of a woman on a beach, taken in Biarritz in 1960. After one night in the club, Jeremy finds himself in Biarritz, in the 1960s!
Cast
Olga Kurylenko, Pierre Deladonchamps, Simon Abkarian, Barbara Schulz
Credits
Producer: Cinétévé
Director: Hervé Hadmar
Videos