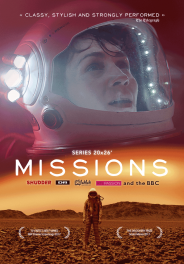 
In a not too far distant future, the eccentric Swiss billionaire William Meyer manages to launch the first civilian mission to Mars. Among the 8 top astronauts and ivy league scientists of his crew, there is Jeanne Renoir, a psychiatrist who is last minute replacement.
After 10 months of space travel, the day before they land, Meyer and his crew learn some bad news : they have been overtaken by their American competitors and their revolutionary technology. They will not be the first on Mars. But since the arrival on Mars, no news from the American crew. Except an alarming last message. The exploration mission becomes a rescue mission. After a chaotic landing on Mars, the European squad finds a survivor. But he is not from the American mission. His name is Vladimir Komarov. He is Russian.
And he is the first man who died in space… In 1967.
Cast
Héléne Vivies, Clément Aubert, Mathias Mlekuz, Jean-Toussaint Bernard
Credits
Producer: Empreinte Digitale
Showrunners: Henri Debeurne, Julien Lacombe, Ami Cohen
Director: Julien Lacombe
Videos