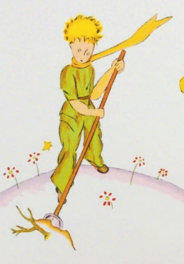 THE LITTLE PRINCE - A STAR IS BORN

In the occasion of the world-famous novel’s 80th anniversary, we rediscover the creation of this universal masterpiece.

Exploring Saint Exupery’s memories in flashbacks, and the creative process of the book in New York, this film tells how its author transformed a children's tale into a universal philosophical fable that transcends ages, cultures and eras.

This ambitious documentary breaks the codes of classic documentaries by closely mixing exclusive archive footages, photos and animations in order to faithfully reenact written testimonies. Learning how this Prince was born is to understand what binds us together, despite the distance and the years.