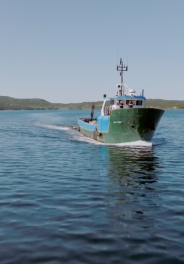 The new business which is melting the planet.


Each spring, a race against time begins in Newfoundland. “Iceberg hunters” assault the chunks of ice released from Greenland. Their objective? Detach large blocks of ice, capture them and load them aboard their boats in order to resell the water at a high price.

Water from this area is known as the "purest in the world” and grows more popular every year. But behind this new El Dorado hides a much darker reality: global warming. This phenomenon could soon lead the region to its demise, as the North Pole is heating up almost 3 times faster than the rest of the planet.
Credits
Producers: Thematics Prod, Sutori Productions
Broadcasters: Sciences & Vie TV
Videos