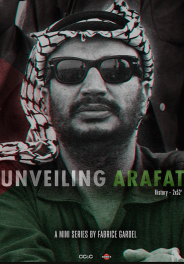 This documentary tells the story of a character who rides an unusual trajectory which crossed the exceptional destinies of Charles de Gaulle, Jacques Chirac, François Mitterrand, Yitzhak Rabin, Ariel Sharon, and Bill Clinton.

The story takes you from the podiums of the United Nations to the jail cells of the Middle East. Like a thriller, we’ll start this story from the end. The death of Yasser Arafat is as much an enigma as is his birth.

We will then explore, point by point, each mystery of his political and private life: his close link with the KGB, embezzlement, financing of international terrorism...
Credits
Producer: CC&C
Director: Fabrice Gardel
Broadcaster: Planète+
Videos