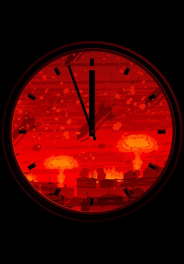 DOOMSDAY: PUSH BACK THE CLOCK

Doomsday Clock is set each year to warn humanity about political shortfalls.


Since 1945, the Bulletin of the Atomic Scientists has been using the iconic Doomsday Clock to warn humanity how close we are to destroying the world with technologies of our own making.

Due to the simultaneous threats of Nuclear Weapons, Climate Change and Digital Disinformation, in 2021 the clock was set at 100 seconds to midnight. 30 years after the dissolution of the Soviet Union and 40 years after the first scientific report on climate change, this project analyzes why today we are closer to a man-made apocalypse than ever before. And it investigates whether the Bulletin’s 75-year-old mission is still capable today of driving the political decision-making in a world that is more global and more divided than ever.
Credits
Producers: OutreMer Films, K2 Productions
Directors: Dirk Van den Berg, Pascal Verroust
Broadcasters: ARD, RBB, Radio Canada
Videos