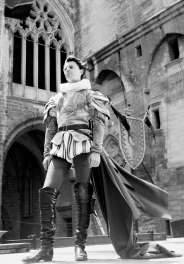 25 November 1959. At the age of 37, Gérard Philipe has just passed away, at the top of his career, caught by a disease he didn’t know he had. In the following hours, an anonymous and compact crowd converged on his home for a final tribute.

Gérard Philipe was not just the greatest actor of his generation. He was also involved in all the battles of his time: as a member of the FFI resistance, as a militant against the atomic bomb and for peace during the Cold War, as a defender of culture within the TNP and as an activist for popular education.

Built on a series of flashbacks with archival footages, this documentary, adapted from the novel by Jérôme Garcin and directed by Patrick Jeudy, will be one of the highlights of Gérard Philipe’s 100th birthday celebrations in 2022.
Credits
Director: Patrick Jeudy
Producer: Temps Noir
Broadcasters: France Télévisions, TV5 Monde
Videos