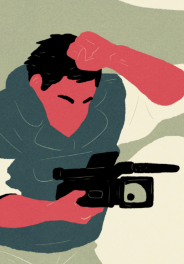 Flavours of Iraq first started with the tweets Feurat Alani published about his personal history and that of his native Iraq: more than 10,000 messages about daily life, family stories and encounters, from Baghdad to Fallujah, through his French life in Nanterre. After being adapted into a book (Le Parfum d’Irak, Albert Londres 2019 award), then a web series on the Arte website, the film continues the story and looks at the more recent history of the country, the ”Daech years” from 2011 to 2017.

It will be constructed in three parts, three periods of time, three chapters of the history of Feurat and Iraq. Always with the same principle: a personal story telling a bigger one, each personal anecdote refering to a key fact in the Iraqi political life. Through the eyes of a child, then a teenager, and an adult, we’ll understand the destiny of the country.