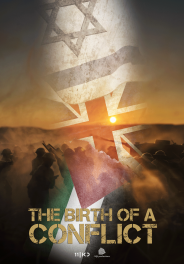 BIRTH OF A CONFLICT

Directed by the writers and producers of "Enslaved" (2020, narrated by Samuel L. Jackson)


The series Birth of a Conflict will provide a new and refreshing lens through which to look at the turbulent Israeli-Palestinian conflict. We will dive into its inception, the roots of the conflict that took place when the British received a mandate from the League of Nations (later on known as the UN) to govern the territory and bring peace to the region.

Each episode will tackle one of the most controversial issues surrounding the birth of the Israeli-Palestinian conflict, all emerged during this mandate, i.e. Geography and Borders, Immigration and Demographics, and Religion and Jerusalem. The series will use never-seen-before archives, testimonies and audio recordings from the era to untangle these complicated and divisive issues and present them in a clear and approachable manner that will transform how our viewers think about the conflict.
Credits
Directors: Avi Merkado Ettedgui, Yaron Niski
Producer: NGI International
Broadcaster: KAN
Videos