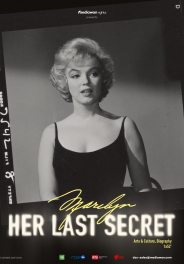 
Montand, Miller, Kennedy: the list of Marilyn’s lovers and husbands is long and known to many. But the only man Marilyn Monroe could never find, even though she looked for him her whole life, was none other than her own father.

After more than two years of investigation, thanks to a strand of Marilyn Monroe’s hair, we have managed to extract chromosomes from her paternal lineage and compare it to the descendants of the men Marilyn’s mother was dating at the time.