Search
Line-up
INT / DOCS / THE ODYSSEY OF A TREASURE (COLLECTION) 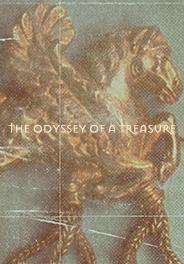 THE ODYSSEY OF A TREASURE (COLLECTION)

1945: the Allies occupy Germany. The world order is undergoing a reshuffling in the aftermath of the war. It is in this context that an American soldier and specialist of medieval sacred art is tasked with a very dangerous mission: he is given three weeks, until the Nuremberg trials, to solve a mystery in order to contribute to the end of the Third Reich and at the same time to return the relics of the Holy Roman Empire.

From the plains of the Troade, to the cellars of a Nazi bunker, to the dark basements of Moscow's largest museum. With Homer and in the footsteps of the extremely wealthy businessman Heinrich Schliemann, we follow the true odyssey of the Treasure of Priam which spans over more than 3 millennia.

This is the story of the treasure of a king, the richest King in classical antiquity, King Croesus. Croesus’s legendary golden hoard, his “cursed” fortune, was lost to time. In 1966, it was discovered in Turkey and sold, to the Metropolitan Museum of Art in NYC. After a lengthy legal battle, it was returned back to its home Turkey, where it was stolen again. Against all odds, it was returned in 2013. It appears that the curse of Croesus's gold still plagues the Lydian hoard…

While leaving Paris in 1940, Hitler gives the order to plunder the Invalides: Napoleon's war trophies needs to be transferred to Berlin in order to adorn the grandiose museum that Hitler will build in his new Germania. But what happened to Napoleon's War Treasure?

EP05: STOLEN MUSIC: THE SECRET TREASURE OF THE NAZIS (NEW)

In 1940, in St-Leu-la-Forêt near Paris, the famous international harpsichordist Wanda Landoswska was completely robbed of her possessions by a Nazi commando instructed to steal priceless musical scores and instruments from Europe. One of the boxes contained the piano on which Chopin reportedly composed his famous Preludes. What happened to this piano and all the treasures stolen from all over Europe between 1940 and 1944?
Credits
Producer: AB Productions
Director: Isabelle Gendre
Broadcaster : RMC Découverte, Viasat, RSI, Ceska TV
Videos