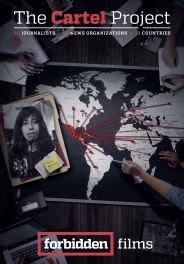 Filmed like a journalistic thriller with exclusive access to the backstage of the investigation, the documentary follows the reporters in real-time, as they travel to the territories controlled by cartels to reveal the rampant impunity for drug traffickers and complicity of political leaders in the global drug trade.

From the cemeteries of Veracruz, known as the "tomb" of journalists, to the heart of the United States, where lives have been shattered by fentanyl overdoses, "The Cartel Project" reveals the human cost of the new drug multinationals.
Credits
Producer: Forbidden Films
Director: Jules Giraudat
Broadcasters: RTS, RTBF
Videos