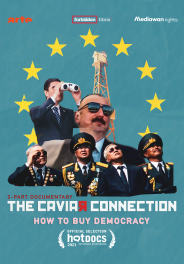 Caucasian and Central Asian countries, are known for their dictatorial regimes, autocratic governments and multiple human rights violations towards their population. However, by using a right combination of soft power and corruption, they were able to clean their reputation and become commercial partners to many countries. Their most powerful allies sit in the Council of Europe or Western Parliaments and choose to turn a blind eye when confronted with their abuses. A band of fearless investigative journalists, including imprisoned and targeted Khadija Ismayilova, exposes the intricacies of corruption and power in the highest government offices of nations such as Azerbaijan, Turkmenistan and Kazakhstan in this eye-opening documentary that unravels like a nail-biting thriller.
Credits
Producer: Forbidden Films
Director: Benoît Bringer
Available lengths: 2x52' / 1x100'
Broadcasters: RTS, RTBF, Radio Canada
Videos