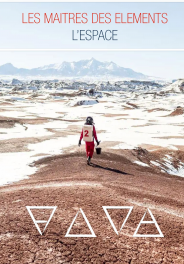 The future of space conquest will depend on controlling the four elements of our planet: Air, Fire, Water and Earth.
Engineers and scientists around the world study, test and are trying to master any of these to prepare for future missions in space and advancing our knowledge of the Universe.

Water can change its states (liquid, gaseous, solid), its temperature (hot or cold current), form (wave or waterfall), its composition (salty or fresh)... Water has a phenomenal power whether in movement or under pressure. Its depths contain extraordinary fauna and flora. However, only less than 2% of the ocean floor has been explored by humans to this day. The water therefore still holds a lot mysteries. It is finally time for researchers to unveil them.

In this episode, we will follow engineers inspecting all the properties of the water element, scientists exploring every drop of water on our planet to reinvent our world !

Fire produces heat and light. This element is naturally associated with sun. At the heart of its solar core prevails a 15 Millions Celsius degrees’ temperature. Although its radiation’s temperature on Earth is much lower, its energetic potential is huge and unlimited. It warms us and enlightens us, without its existence, life on Earth wouln't be suitable. Solar power will be, according to experts, the most exploited source of energy in the future. However, when it comes to dealing with this fire ball, scientists are facing two major issues: its interminttency and its heating power.

Researchers have set themselves the challenge of mastering these two phenomenas.

Some who do not fear the sun's heating power try to exploit the most of it thanks to concentrated mirrors, others try to capture the power of the sunrays in the stratosphere, while others benefit from the natural phenomenon of photosynthesis to provide light.

The earth element includes the whole organic substance on our planet’s surface, from different types of rocks to all the layers existing underground.

Soil is also known as a solid surface whom consistency and composition constantly vary such as stone or clay. Deep down, soil is made up of different strata differing according to their location where metals and minerals can be found. Magma, the core of our planet, can be found even deeper.

In this episode, we will follow the “masters of the earth” trying to exploit or transform each kind of the earth’s strata, from the ground to the core. From the heat of the earth recovered by ultramodern geothermal power stations, to new biomass techniques, applying the exploration of magmatic energy and the study of above-ground crops to perhaps one day do without the earth itself. We will follow the recent discoveries of geologists and chemists as well as the ambitious projects of architectural engineers who aspire to make us live twenty thousand leagues... below ground.

Air can appear in many forms, some of them are still unexploited by humans. Beyond the so-called laminar currents, meaning regular winds close to the ground and captured by traditional wind turbines, air can whirl and change temperature thanks to its warm and cold streams.

Air can also be rough and powerful at sea while being very fast at high altitude and it can start fluctuate and periodically change direction in the stratosphere.

Apart from this power and rythm variations, air can also exhibits some strange natural phenomena as the magnus effect, which allows an object to maintain its lift in the air through its rotation.

In this episod, we’ll meet some “masters of air” who have set themselves the challenge of benefiting from every kind of movements the air element is part of on our planet to reinvent the way we travel, produce electricity, freight transports...
Cast
Thomas Pesquet
Credits
Producer: Thematics Prod
Director: Elodie Fertil
Broadcaster: Science & Vie TV
Videos