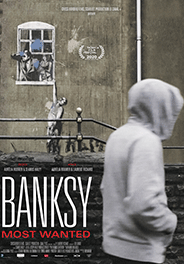 Banksy is a household name, but behind this name hides a multitude of stories, artworks, stunts, political statements and identities, leading to one of the art world’s biggest unanswered questions- who is Banksy?

Through the testimonies of those who know him and have worked with him, but also of those who exploit him, hunt him down, claim him... BANKSY MOST WANTED draws an in-depth portrait of this masked Robin Hood. Each of these investigations reveals a facet of the artist: his commitment to environmental causes or political refugees, his links with the music scene, his entrepreneurial side.
Credits
Producers: Cross Borders Films, Scarlett Production
Directors: Aurélia Rouvier, Seamus Haley
Broadcasters: RTS, RTI, Sky Arte, Globosat, RTVS, YES DBS, PTS, Ceska TV, SVT, HRT, Art.TV, RTBF, ERR, Asharq News, Avrotros, ORF, RTP, NHK, EBS
Length available : 52'/ 90'
Videos