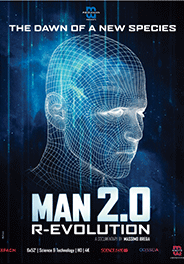 Man 2.0 is the multi-ethnic and multicultural result of today's science. For 4.5 billion years mutation, gene flow and natural selection have driven the evolutionary process and shaped life on Earth. Today cultural evolution is taking over, changing how we live, how we think and how we die. For the first time in history, humankind has the knowledge and the tools to intervene directly in its own evolutionary process.
The future is already present thanks to the latest advances in genetic mapping, that not only allow us to ‘repair’ our defective parts but also to improve our genes.
The six part documentary series investigates the growing role of science in shaping human life. We meet the most prominent scientists, anthropologists and futurologists of Europe and the rest of the world to explore the state of the art of the human species: from a Genetically Modified Homo Sapiens to Homo Technologicus and Digitalis.