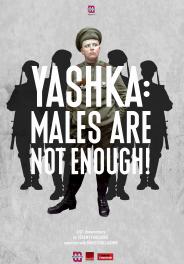 The story of Yashka, an illiterate female farmer who became a war leader in a violent male world: the journey of an icon. If official History has neglected her impact, the people, the press, the warriors and the politics all know the story of Maria Bochkareva. From the Women's Battalion of Death to the Pussy Riots, the women's fight for equality does not date back to the 21st century only.
Credits
Producers: Empreinte Digitale, AB Productions
Director: Jérémy Fauchoux
Videos